The number of known fatalities rose to 41 in Mozambique on Monday as areas slowly began to assess damage from Cyclone Kenneth.

“The coastal city and the capital of Cabo Delgado Province, Pemba, has been inundated by more than 594 mm (23.40 inches) of rain by Kenneth, with the majority falling on Saturday and Sunday,” said AccuWeather Senior Meteorologist Kristina Pydynowski.

“Help us, we are losing everything!”, the Associated Press (AP) quoted residents of Pemba shouting at passing cars amid the severe flooding. 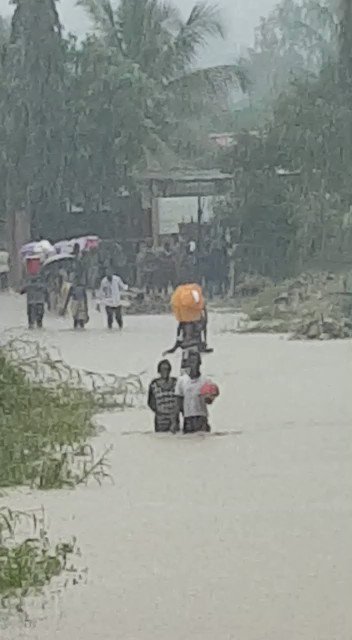 Floodwaters were waist high in parts of Pemba for several days, and homes have collapsed amid the flooding in northern Mozambique.

Nearly 700,000 people may have been impacted by the cyclone, the AP said, citing the country’s disaster management agency. Many have been left exposed and hungry amid rising floodwaters.

However, the agency commended advance notice of Kenneth in preventing an even more dire situation.

More than 35,000 homes in northernmost Cabo Delgado were partially or fully destroyed by Kenneth.

This figure includes about 90 percent of homes, which were mostly made of mud, in the main village on Ibo Island, Mozambique. Ibo is located near where Kenneth barreled onshore.

The number of fatalities rose dramatically on Monday as recovery efforts continued but were hindered by additional downpours.

Aid workers continued to face difficult conditions while trying to reach thousands of survivors on Tuesday, despite rainfall diminishing according to the United Nations. 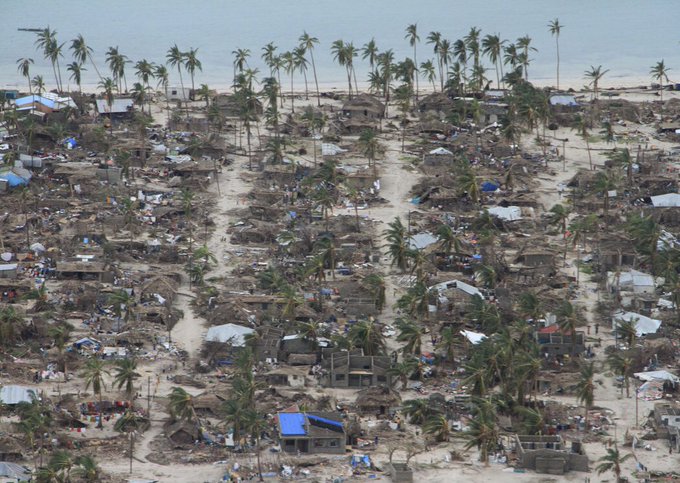 Damages are severe, many homes and infrastructure are completely destroyed.

Additional showers and thunderstorms can bring localized downpours into Wednesday.

“That can make the flood disaster even more dire in the hardest-hit communities,” Pydynowski said. “Streams, rivers and coastal waterways can continue to overflow their banks and further put neighboring land and homes under water.”

More homes may succumb to the flooding. Boats and helicopters may need to be deployed to reach victims where flooding becomes too severe for vehicles.

The weather will improve during the second half of this week as rainfall becomes less likely each day from Thursday into the weekend.

Kenneth is the first tropical cyclone with the equivalent of hurricane strength to strike Mozambique’s northern province of Cabo Delgado since modern record-keeping began 60 years ago.

RELATED:
Mozambique Weather Center
Cyclone Idai was the deadliest storm to strike Mozambique in at least 3 decades
Storm surge: Explaining the fury and science behind one of nature’s most potent forces
What Hurricane Michael’s new Category 5 status means for those affected

According to the U.N., the strike by Kenneth marked the first time in recorded history that Mozambique has been hit by two powerful cyclones in the same season. Last month, the central part of the country was slammed by Cyclone Idai, which resulted in hundreds of fatalities.

The dangerous cyclone made landfall in Cabo Delgado, about 100 km (62 miles) north of Pemba, at the end of the day on Thursday, local time. Kenneth had 10-minute maximum sustained winds of 200 km/h (124 mph), the equivalent of a Category 4 hurricane in the Atlantic or eastern Pacific oceans, as it moved onshore.

NOAA-20’s Visible Infrared Imaging Radiometer Suite (VIIRS) sensor captured this view of the historic storm at around midnight in Mozambique several hours after it made landfall. (NOAA)

Red Cross teams in northern Mozambique reported serious damage in towns and communities that were struck by Kenneth on Thursday night.

Electricity was cut on Ibo Island, where many residents also lost cell phone service when the cyclone downed a tower.

A woman crosses a flooded street in the aftermath of Cyclone Kenneth in Pemba, Mozambique, April 28, 2019. REUTERS/Mike Hutchings

There are also reports of “extensive damage” to homes in Quissanga, according to the AP. Four ships sank offshore of Palma, but everyone survived.

Prior to reaching Mozambique, Kenneth killed three people in the island nation of Comoros on Wednesday night.

Streets across the island were littered with downed trees and debris from homes. The roofs of some homes were also ripped off. Widespread power outages occurred in the capital of Moroni.

About 1,000 homes sustained flooding and key crops were destroyed.

The areas being affected by Kenneth were largely spared from any of former Tropical Cyclone Idai’s destruction in March.

Many locations in central Mozambique, including Beira, suffered catastrophic damage. Residents are still trying to rebuild and recover from Tropical Cyclone Idai more than a month after the storm’s landfall.

ADVERTISE WITH US LIVE